In 2011, 4.5 million were working in India, compared to 12.6 million a decade before, according to the country’s labor minister.

A 2015 estimate from the International Labor Organization put the number of child laborers between the ages of 5 and 17 at 5.7 million. Both numbers may not fully reflect the scale of exploitation, due to the underground nature of a lot of working arrangements, but overall the problem seems to be declining.

The government’s figures claim the problem has fallen by 64% in a decade. That’s significant progress.

Child labor is harmful because it puts children in dangerous and abusive situations, exposes them to dangerous chemicals, potentially stunts their growth and usually ends or limits their education.

More than half of India’s child laborers work in agriculture, primarily harvesting cotton, sugarcane and rice. Exposure to toxic pesticides and injuries from sharp tools and heavy equipment are common.

Other children are involved in the global garment industry, which has become synonymous with the exploitation of workers. These children work in dim, stuffy rooms making garments or other objects for shifts that sometimes stretch for 12 or 14 hours.

Most of the rest of the child laborers are caught in the service sector where they provide cheap labor for shops, restaurants, hotels and wealthier families or in mining, construction or precious stone cutting. 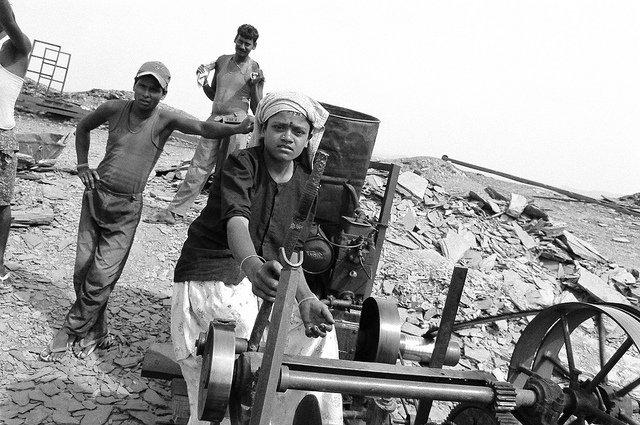 Image: ILO in Asia and the Pacific

Amendments are currently making their way through the Indian government that would effectively lift the minimum age of work to 15 and set new restrictions on labor for kids 15-18 in hazardous industries such as mining, gem cutting and cement manufacturing.

Those who employ children will also be subject to a maximum punishment of up to two years in jail and a fine of $745 USD.

These updates would contribute to the decline in child labor, but actually enforcing laws across the country will be a difficult matter.

Many industries are poorly regulated and extreme poverty, the main driver of child labor, affects 360 million people in the country. As with many social ills, eliminating child labor means getting to root causes such as gender inequality, lack of access to schooling, contaminated water supplies, an absence of nutritional food and so on.

Child labor is a global problem, with more than 215 million kids stuck working in harmful conditions.

The prevalence of child labor usually comes down to enforcement agencies: are they well-funded and capable?

In the US even, there are worries that child labor will rise as funding drops for the primary regulator, The Occupational Health and Safety Administration or OSHA.

The ethical implications of child labor varies in every situation. In some cases, child labor doesn’t prevent a kid from going to school, socializing and living a fulfilling childhood.

But in the majority of cases, illegal child labor is undeniably wrong and harmful.

“More than half of [child workers] are exposed to the worst forms of child labour such as work in hazardous environments, slavery, or other forms of forced labour, illicit activities including drug trafficking and prostitution, as well as involvement in armed conflict,” according to the UN.

Ultimately, no child should ever have to sacrifice his or her childhood to toil in factories or farms or any environment for wages.

Most of the time, kids are posed with no choice but to work because poverty is so crushing, which then sets that person up for a lifetime of poverty and the cycle of poverty–fed by deprivation and exploitation–continues.

Ending child labor begins with setting tough laws that punish those who exploit children. But to achieve progress, schools have to be invested in, food and water have to become more accessible, women have to be empowered and communities have to be given the resources they need to thrive.

Child workers, India
Newer Post India is rounding up a gang to clean the Ganges River and Germany just agreed to be a part of it Older Post M.I.A. previews new music video for ‘Rewear It’